While reading an ancient parable in Alan Watts’ “The Way of Zen” (1957, Pantheon Books), I achieved sudden enlightenment: the Three Stooges were actually Zen masters!  It’s true! All I had to do was change the names of the Masters in the story, and it made total sense. To wit:

On one occasion Moe and Curly were out for a walk, when they saw some wild geese flying past. 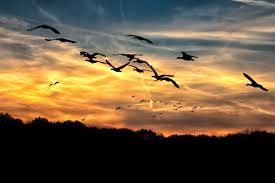 “What are they?” asked Moe.

“Where are they going?” demanded Moe.

Suddenly Moe grabbed Curly by the nose and twisted it so that he cried out in pain.

“How,” shouted Moe, “could they ever have flown away?”

This was the moment of Curly’s awakening.